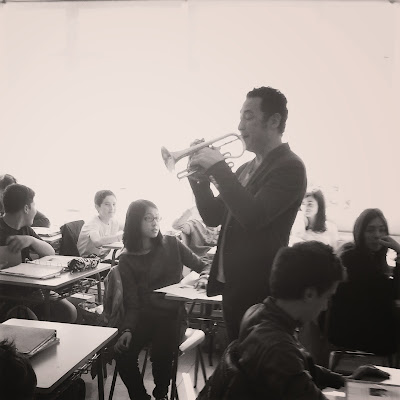 "On Monday, our English teacher came into class accompanied by two members of the "Orquesta Sinfónica de Galicia", John Aigi Hurn e Benjamin Smith. John Aigi was born in Tokyo. His mother is Japanese and his father is American. He emigrated to Spain, and there he is a member of the OSG and he plays the trumpet. Benjamin was born in Sydney. He plays the violin with the OSG. After introducing them, the teacher informed us that Aigi is one of the most important trumpet players in the OSG. Later, he took his cornet out of a brown suitcase and he began to play. He left us impressed. He explained us different things about the cornet, that its origin owes to that one of the curves of the stick had the same form as the front part of an old stick used by the shepherds to hold the sheep, and that, unlike the trumpet, it´s very cheap and small. My classmates and I asked them questions; I asked him where he came from and he said that he left Seattle to come to Spain. Because of this question, he drew a map of the USA on the blackboard and asked us where Seattle was and L.A.Thanks to Miguel, he got the answer. As a final activity, they told us, one by one, to tell them our name and our hobby. Some of the questions were: -Do you like SiA? Benjamin wanted to make sure if it was the blonde singer and,when we confirmed it,he thought that she had fabulous songs. -Have you ever played the pipe? Benjamin said that he didn´t dare to play the Galician pipe because it is very difficult, but that he played the Scottish pipe. Roman said that he collected minerals, so Aigi told us that there is a mineral in SouthAfrica that is very important for technology. And Benjamin told us that in the south east of Australia there is much gold. The bell rang and they left, but it was very fun and entertaining class where we learned many things." Carolina Sanmartín Pérez, 2ºESO D
Publicado por Mar F. Blas ás 7:40 a.m. 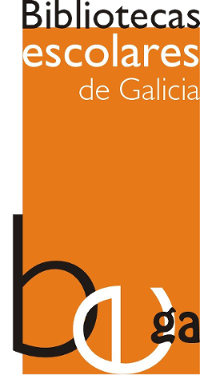 Pola paz e a no violencia